With or without our shirts?

Ha, that got your attention, didn't it?? That's what Rick said to me. Yup, that right. Rick. Said. That. To. Me.
Here's the scenario. I had made a poster with 8 different poses and asked the nice casino employee to take it to Rick at the beginning of the meet and greet.
employee: "I, um, I don't know if I can. He's, um, he's kind of busy right now."
Me: "I know. that's the whole point. It's a funny. Just take it up to him. He can do whatever he wants with it."
employee: "Really, I, um, don't know."
Poor guy probably had no idea who the hell Rick was. Anyway, he finally brings it to the other side. Hands it to Rob Koz (Rick's manager) when then shows the other guys. then they put it on the table.
When it gets to be our turn, there is some camera chaos because Kelley's camera battery died. But when it was my turn, I said, "I want pose E" and pointed to the poster. "pose d?" he asks. "Is that the one with or without our shirts?" By now, he is wrapping his arms around me for a great big hug and nice photo op. What do I say?? "Without, of course!"
Here's the result. 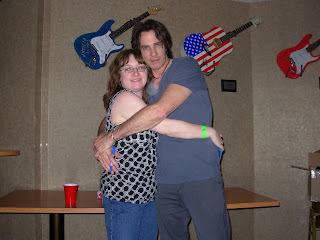 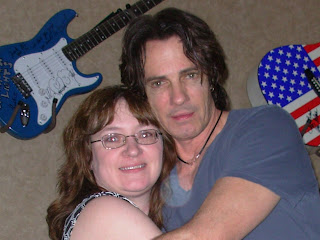 And yes, I am jealous.

LOL, looks great! I too, am jealous!

I am jealous too!

How cool! You really WERE there :D

I'm sooooo freakin jealous!!! He's still SO hot! That is the ultimate in coolness right there!!

So why do you both still have your shirts on?