Ah, the first xray (I almost took a picture of it on the computer screen) to prove that the finger is not broken. Well, actually it's not official yet. still waiting on the radiologist. But the treatment is the same either way, and it actually does feel much better. So, the splint came off today. But will go back on 2 times this week (gym days).

This weekend is Baby's birthday, and since she is about to be 9, I'm thinking she needs a new nickname. I'll try to use my creative brain...LOL.

All else is going well. School's almost done, Milwaukee week is almost here, and spring will come eventually. I think. Well, probably. Maybe?? :-)
Posted by Aim at 11:21 AM No comments:

I think Baby may have broken her finger. She got it smashed in the car door last night. It's swollen. It's bruised. It's painful to the touch. Fisher thinks that maybe it's just bruised. I'm not so sure. But what do you do for a broken finger anyway? Well, document it of course. I'm going to take a picture of it. (bad mommy??!!!) She was already scheduled to see the Doctor tomorrow, so we'll add that to our laundry list of things to talk about. I'll post a pix if I can get a good one.
Posted by Aim at 2:22 PM No comments: 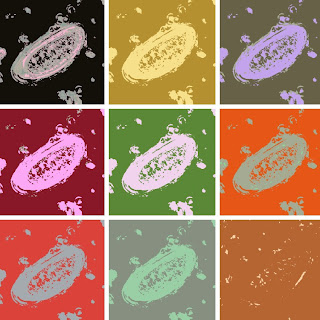 Sound kinda raunchy? Or maybe a dog breeding company?? Nope, it's a super cool digitial photo site. It is partnered with Flickr, which I haven't used much, but I'm thinking I might. www.Bighugelabs.com had lots of cool effects and such that you can do with your photos. You can then purchase them from Flickr or you can save to your computer and print yourself. I did a "Warhol" of my homework (pinworm) and it looks very cool. (see photo)

I'm going to make a magazine cover for Baby for her birthday decorations, and I'm going to try the photo book. I'll let you know how that turns out.
Posted by Aim at 8:51 AM No comments:


I started this blog for fun. It’s worked, most of the time. I enjoy it. There’s really no pressure. I don’t HAVE to blog, but if I want to, I can. It’s easy. It’s free. Sometimes, it’s even therapeutic. I can write about work, about the family, about my hobbies (Rick Springfield, reading, writing), about school, about my friends. I can write about anything. I don’t think that I have offended anybody yet. If I have, it was completely unintentional and I am very, very sorry. I’m hoping that this blog is around for a long time. Thank you. Me
Posted by Aim at 1:05 PM 1 comment:

Two in One day..this artilce can also be found at www.rickspringfieldandus.blogspot.com

Okay, so I finally got that pesky link fixed for my new blog. It only took a week. I'd check, it would look good, it would not work. Helps to have ".com" at the end! Oh, boy. Anyway, the link is up now so if you have any suggestions for that blog, let me know.

I also see that Becky updated Zach's blog with a whole bunch of information, so check that one out as well.

Not sure what else to throw out right now. Kinda feeling crazy with it being the end of the semester, Lyric having practices for 2 plays this week and Baby just counting down til summer. I have 2 papers due for my class, plus another test and the final in the next 3 weeks.

Oh, and we still don't have tickets to see Rick Springfield in May. We know it's going to work out, but when, I ask, When? When will we get the tickets we want?? (Actually never, because we want front row and that ain't happenin', but we're open to ANYTHING ON THE FLOOR! ) So, we keep checking.
Posted by Aim at 12:20 PM 1 comment:

Posts that is. I'm planning something fun for 100, which should be this week. Nothing new and exciting going on really. Lyric has a performance this week (actually 2) and then we are done with the school musical. But the local one isn't until June, so we'll still be running her around 4 x week. Baby is going to be starting dance. She didn't get into either academy that she auditioned for and I think it was as hard for us to tell her as it was for her to hear it. She cried and cried, little bitty sobs. Oh, it was awful. But it's going to be okay, she does not have to do everything that Lyric does. She WANTS to, but she doesn't need to. So we are going to focus on dance and sports (soccer or volleyball) and let her be her own person. That's all we want of our kids anyway, right?
Posted by Aim at 12:14 PM No comments:

This is one of the coolest things I've seen lately. Thank you very much, Family Fun Magazine. Check this out. If you are a list maker (like me) or an organizer carrier (like me) or a very busy lady (like me) you can print one sheet of paper to help you stay on track/keep track/feel less mental.
The link is : http://www.pocketmod.com/

You can personalize your mini organizer and then carry it with you so you don't forget/miss anything. And it fits in a pocket. Any pocket. Gotta love it.
Posted by Aim at 9:19 AM No comments:

Because apparently I don't feel that I have enough on my plate, I've added a blog. You can click the link to the right. Making Money Your Way has been a book idea of mine for a long time. I finally decided that it might just be easier to blog it. Let me know what you think!
Posted by Aim at 8:45 AM 2 comments:

Note to self- never be afraid to try new things. Make sure that your friends and family know how much you love them. Don't be afraid to reach for your dreams. It can't hurt anything to try. You can do anything! Love, Me
Posted by Aim at 7:25 AM No comments: