Yesterday was my due date.  sixteen years ago.  I didn't realized until late last night that was the reason I was out of sorts all day.  in August of 1993 I had a miscarriage.  I was between 8 - 10 weeks along.  No good reason.  Just one of those things that happens.  I didn't understand it.  I was depressed for months. (however, I didn't realized that at the time)   I went for an ultrasound and they couldn't find the heartbeat.  A few tests and a week later and the doctor told me that there would be no baby.

Three months later we were pregnant again.  Due date: August 6.  No baby then either.

But it's okay.  I've come to terms with it.  and now I have Lyric and Jazz.  With as much as they make me crazy, I know that had either of their brothers (mom's intuition says they were both boys) lived, I wouldn't have my two beautiful girls.  And I love my girls. 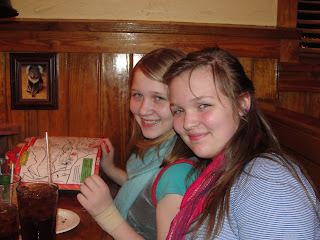 So sorry to hear of your losses, but you do have two beautiful girls to be proud of!! Enjoy them!