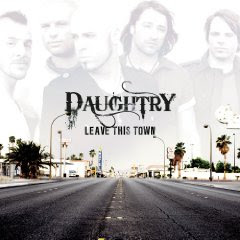 Back in July, Daughtry released it's second CD. I bought it off of itunes, downloaded it, put it on my ipod and occassionally listened to "No Surprise". Last week, I heard the second single was getting ready to be released so I fired it up on the ole ipod...and haven't stopped listening to it yet. Literally. I hear the songs in my head as I'm falling asleep and start singing them to myself as soon as I wake up. I want to listen to them loud! I want to listen to them all the time (except for one). I loved the first Daughtry release and now that I've started listening to this one, loving it as much. Here's my review/breakdown of the songs on the album with my favorite lines from each song. BTW, the review is not necessarily in the order that the songs are on the CD...just so you know.

"Life After You"
The title makes me think of "I'm better off without you" but once you listen to the song, you realize it's just the opposite. This song is about realizing that there is no life after you. We were meant to be together and I'm coming back. I have two favorite lines in this song. First, "All that I'm after is a life full of laughter..." Second, "I must've been high to say you and I weren't meant to be..." Great lyrics. I've probably listened to this song the most. I believe it is the new single as well.

"No Surprise"
Loved this song the first time I heard it. We often stay in a relationship that isn't working. Suddenly, in this song, Chris gives us the breakup song of 2009. "It's no surprise I won't be here tomorrow" and "As I say it louder I love how it sounds". Like he just figured out how to get out. A little snarky, but snarky is my new middle name so I LOVE it.

"What I Meant To Say"
More snarky here. Another relationship gone wrong song. This song tells a story of one person working hard to hold on, while one has already let go. Favorite lyric "All this sucking up to you is getting old". Seriously!??! I love that line.

"Open Up Your Eyes"
this is my least favorite song on the CD. So much so that I might delete it from the ipod. It's a nice story, I guess. I'm just connecting with it like I am with all the other songs. Favorite lyric, if I had to pick "Welcome to the first day of your life"
editor's note: after listening to this song a few more times, I've decided to keep it on the ipod.

"September"
second to least favorite song, but it tells the story of summers past, how we want to hold onto those memories of good times. Favorite lyric "Nothing to lose but everything to gain"

"Ghost of Me"
Another relationship song. Somebody was going through some stuff while they were writing. I hope it wasn't Chris because he's a sweety and I'd hate to hear that his AI fame messed with his family. Anyway, this song is a little more punchy than some of the others. It makes me smile everytime because I can imagine hearing it live. I don't really have a favorite lyric for this one. But definitely worth a listen.

"Everytime You Turn Around"
This one is a light rocker as well. It makes me think that somebody is doing things (moving forward in a career maybe??) while somebody stays behind. Favorite lyric "I've been following my dreams, trying to find the scene where you believed in me"

"You Don't Belong"
This one could go a couple of ways. Almost sounds like an admission of an affair. "You don't belong to me, I think you lied to me" but I can't get a great read on it. I do like it and listen to it a lot.

"Learned My Lesson"
Beating a dead horse much?? This song is about going back to something that is bad over and over again. We've probably all been there at some point as well. This song puts it out there. Favorite lyric "It turns out I haven't learned a thing"

"Supernatural"
This is a 'fun' song. It's got a great feel and it's a little punchy. It's almost like getting sucked into something before you even realize that it happened and you don't know how to get out. And it's so intense you're not sure if you want to get out. No favorite lyrics, but this is a great song.

"Tennessee Line"
This was my least favorite song at first, now it's decent. It's another "I didn't know what I had until it was gone" song...but very slow, sweet and methodical. "Well, it's my heart I follow this time" and "Tell me how to make right every wrong turn I made" love it.

"Call Your Name"
Ever loved somebody who didn't love you back?? That's what this song says to me at the beginning. a little. It's also a "I didn't want to break your heart" song. Nice song. Another slower one but worth a listen.

Overall, this CD is fantastic. I wish I had a copy to give away but I don't so run out to your local WalMart, target, Itunes, wherever you get your music from and pick up your copy! If you like Daughry at all, you won't be disappointed. I'd love to hear feed back on what you hear in these songs as well. Leave a comment. Thanks!
Posted by Aim at 8:28 AM

My daughter likes this group. I myself just tend to listen to whats on the radio. I'll have to let her know about this cd-thanks!

Thanks for this very detailed review. I like Daughtry's music a lot, and like you said, "he's a sweety". I've been thinking about getting this one, and now after reading this review, I gotta get it!

I just awarded you the best blog award. Please follow the link to learn how to accept your award.
http://mintgreenwithenvy.blogspot.com/2009/10/best-blog-award.html congrats!