A winner and a new giveaway

I'd like to congratulate Marsha for winning the Hot Locks doll.  She has two little girls who I think will love playing with this cool new toy.

I'm also going to start doing regular giveaways in the blog.  at least once a month.  This month's prize is: 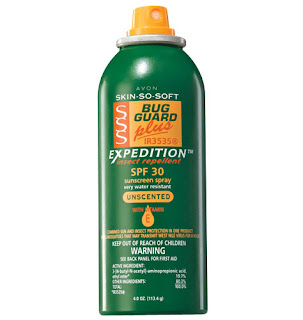 Avon's Skin So Soft, Bug Guard Plus.  A must have for summer if you are going to be out doors at all.
Repels mosquitoes for 8 hours. Provides effective protection against gnats, no-seeums, sand flies and biting midges. DEET-free, dermatologist-tested, hypoallergenic. 2-in-1 protection.* Aerosol spray, 4 oz. net wt

*All you have to do to enter is:  leave a comment telling me what your favorite outdoor activity is.  Please be sure to include an email address so I can get back to you if you win.
*For an extra entry:  post this giveaway on your blog and comment here with the link.  ( I will be checking)
*For another extra entry:  go to my website:  www.youravon.com/akrueger8895 and comment here with your favorite item.(it might just show up as a giveaway!)

(No pressure to order but if you see something you must have while you are surfing around my website, you can order and have it shipped right to you.  enter code "FSANY" to get free shipping.)

This giveaway runs from today, April 29 until Thursday, May 6.  I will draw for a winner on May 7th, before I head out to the Rick show.
Posted by Aim at 6:40 AM 2 comments:

I wrote this last fall.  I think that it could turn into a really good story.  Let me know what you all think.

So, I left the message for Sarah and headed to the shower.  I was a little hung over but doing okay.  When the phone rang, I assumed it was Sarah and quickly answered it.
"hello?"
"Hey."  It wasn't Sarah.  it was Matt.
"Hey,"  I answered softly.
"How are you doing today?"
"You care because?"
"Because I do.  I've always cared about you."
I laughed out loud.
"Okay,  I can see how you might not believe that, but it's true."
Posted by Aim at 1:41 PM 1 comment:

Time for a Tattoo

Amy at Escape to Thought posed a very good question.  If you were to get a tattoo right now what would it be? I've actually considered getting a tatttoo off and on over the years, but I wanted it to be something special and meaningful.  If I was to go today, I would get a tattoo of a dotted eighth note with a pair of dance shoes hanging from the flag.  It would be on my inner left arm, up near the elbow.

I know you are thinking that's kind of weird and unusual.  Let me tell you a little bit about why this would (and probably will be) my tattoo.

About a year ago, a situation occured within my family that shook it to the core.  Without going into the gory details (and to protect those involved) one of the outcomes was that Lyric started cutting herself.  At first the story was that she fell, and I almost bought it, but then I opened my eyes a bit more and realized what it really was.  So, for the past 11 1/2 months we have been dealing with that.  She gets angry/frustrated/hurt and she has the urge.  She hasn't cut herself for almost a month now.  This is great news.  But I worry all the time that she will have a bad day and cut herself, or worse.

Jazz is a dancer, hence the nickname.  Since dance is a big part of her life, I would incorporate the dance shoes.

It was either this or have a tattoo for each girl and I'm not quite ready for that yet.

The placement on the arm is because that's where Lyric has done most of her cutting.  There is also a to write love on her arm movement.
Posted by Aim at 9:06 AM 2 comments:

Labels: cutting, tattoo, to write love on her arm

I have binders at work for notes about my job, payroll, department charges, and more

I use binders to keep all kinds of things organzied.  I prefer the ones with the plastic sleeve on the front so you can give it a pretty cover.  But even the plain ones you can slap a sticker on so you know what's in it.

I have a nice little stash of extras and i add to it at school supply time when they are on sale for like 50 cents.  some binders get reused and others will hold their information for years.

Bet you thought this was going to be an Alice In Wonderland post, didn't you?!?  Well, it's not.  This post is all about how getting up in the morning sucks!  My alarm goes off and I hit the snooze a whole bunch of times.   I don't count because 1) I'm not a morning person, 2) I barely function without my coffee, 3) I barely function before 9am, 4) there's nothing I hate more than that annoying sound (which does not explain why I continue to hit the snooze- I get to hear it over and over and over.

Unfortunately, this must be genetic as Jazz and Lyric are most definitely not morning people.  Jazz used to be: early to bed, early to rise, just like her dad.  Not so much anymore.  Lyric has never, ever, ever been a morning person.

In the morning, I try to be nice when I wake them up, but really the only way to get them to move is to be loud...repeatedly.  This makes mornings at our house one big fat pain in the hind end.

So, let me ask, does anybody have any ideas on how to help this part of our morning run a little smoother (or quieter)?  I'm open to suggestions.
Posted by Aim at 8:36 AM 2 comments:

I am finally all moved into my new apartment.  Not all unpacked, but all moved.  This weekend I am having an Open House to help support my Avon business.  For all my bloggy friends, you can help too.  Go here and click on "eParties".  You will be able to browse through a virtual catalog and order any Avon products you like.  When you are done shopping, check out and enter "FSANY" as the promo/special code.  This will get your items shipped directly to you, for free!

If you would like to earn some free Avon products, you can schedule your own eparty.  just leave a comment here with an email address and i will get back to you.

Here's what Lyric has to say about herself:

I am 14.
I'm insane.
I love liek crazy and don't hate too often.
Once I love you, I'll probably never stop.
Unless you REALLY screw with me...
I won't forget you if you were ever once in my heart.
I believe that everyone should have a chance to prove what they're worth...
The last year of my life has really kicked my ass.
But it's taugh me a lot about life too.
I'm trying my best to fix what I don't like.
That's extremely hard, but I won't give up...
I love my closest friends to no end.
I have godparents.
My godfather ditched me a while back...
so I disowned him...
my step godfather is kick ass.
you can call him Christopher Minnick...
I call him loser :-)
My godmother is Kelley Minnick
I love these two people with my whole heart.
My mother is my number one hero.
I have a little sister.
She's great.  I couldn't live without her. :)
Chris and Rhea are the best cousins EVA! :)
Yes, I believe in God.
Don't mess with the power of prayer...
I've seen miracles and done stupid things...
I've experienced so many emotions at one time...
I don't regret what I've done.
I just learn.
I'm learning everyday what it means to live and love.
I love my life...
No matter how shitty my day was.