Jazz is having a birthday soon. She's having a Twilight themed party. You may remember reading about it here . Last night we went to order the cake. She wanted a picture on her cake. The same picture that we put on her invites. Actually, this picture. 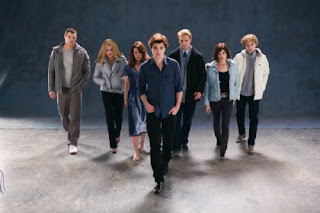 So we went to store #1 (names withheld to protect the innocent-ME!) and went through the whole this is what we want on our cake, yadda yadda yadda. then I handed her the paper. "We want this picture." "Oh, that's so cool," says the mean lady who would break Jazz's heart, "But we can't do that. it's copyrighted." "It's just a picture I printed from the internet." "Yeah, but it's the characters so we can't do it." Seriously?? It's not the cover of the book, it's not something I'm going to go make money off of. It's a stupid birthday cake!! Even the "I know somebody who just had a cake done at your XYZ store and they had a Twilight picture" card didn't work. So, Jazz designed a cake with an apple on it. The mean lady said she couldn't even write "Colors like Twilight" on the order form because it's copyrighted. Really?!? I was almost buying the photo thing, but you can't even use the word to describe something?!? Seriously??? What if I wanted it to say "Have a great Twilight party"? Would she have said no!?!?

So, we walk away. Jazz is upset. I say "We aren't done yet." We head over to the COOL store. First thing I do is show the nice lady the photo and ask "Can we get this on a cake?" "Sure" says the nice lady. "All the stuff is over here." So we go to the cute little ordering counter, Jazz picks out her cake, the filling, the border for the picture and the nice lady says "See you this weekend."

I don't know for sure what the rules are for photos on cakes, but my co worker had two cakes made at two different places and neither place (each was made at a different location of each of the two stores I went to) questioned her photo.

I wonder, if I wanted to put say, Peter Facinelli's face on my birthday cake if it would be denied?!? What about Rick Springfield?? Is he copyrighted?? What if it was a bunch of individual pix?? I don't know.

What I do know is Jazz is getting the cake she wants, her party is going to be a blast, and I'll have photos to share on Monday!

Journey on! by Kelleye said...

I hate those BD Cake delima's! you know, you can just print and put the picture on your self, granted you would have to take it off before eating- but it would help with the theme- have them prof. make the cake to your liking and you put whatever on it- I did that once with a teletubby ( yeh I know) cake- I put my baby daughters face in the sun and placed that on the cake everyone thought it was the actually picture of the one of the show. It was really her on her cake!=))) Hope it works out for ya- sounds fun!

It must have been Walmart. They do that. But I think by law they can't. The supermarket I used to work for could not either. A friend of mine used to do cake pictures. All you had to do was bring her a pic (any pic) and she could scan it and put it on an icing sheet and it would be placed on top of the cake. I had one done for my daughter once. They are pretty cool. Can't wait to see how yours turns out :)

I had the same problem for my twilight cake. That is why I got it done the way I showed you. Thing is does it also depend on who is working. If I brought some random picture in of like you say Peter or Rick would they know who it was?