Well, we made it to Friday (or Phriday). Lots going on, lots to talk about. First (or Phirst) here's my photo. I debated about this one, because it seems like the theme in my Friday's is Rick Springfield Concerts, and I really do have more than that going on in my life. Really. It just happens that at those concerts is where GREAT THINGS HAPPEN! 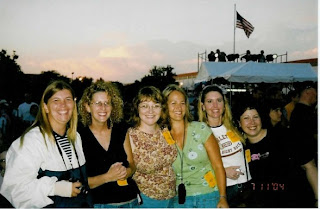 Left to right: C, K, Me, L, M, D. There were supposed to be two more of us, but they backed out at the last minute. We then had 2 unused tickets. Before the show started, we found two girls (possibly mom and daughter) who were wearing Rick shirts. We asked if they were going to the show (yes) and if they had front section seats (no). We gave them the tickets. They were hesitant at first, but finally took the tickets. We saw them later and they were really enjoying the show. I'd like to thank the nice Beloit Riverfest Staffer who took this photo for us. We all are smiling, looking at the camera, and looking good. It's hard to make that happen with six people involved. This was also my very favoritest concert/venue/concert experience.

The weather was great. We were outside. Rick rocked. And I was with friends. Nice.

On to the other things.

I have a bit of a complaint about General Hospital. Not the place, the show. A few months ago I watching and I heard in the background "Dr Noah Drake to the ER." it made me giggle like a school girl to hear his character's name. Then, when the infamous Dr Noah Drake is back on screen and has lines and stuff, they say that he was off doing Drs Without Borders?!? WTF? Did somebody forget to take him off the schedule? I hope that nobody died while they were waiting for him to show up in the ER.

Second complaint. A couple of days ago (maybe last week) Robin and Anna were sitting in the waiting area of whatever floor they are always on. In the background (yes I really do listen to this stuff) there was a "Code Pink NICU" paged and nobody that was on the set/in the scene even blinked an eye. Seriously?? I work in a hospital, 3 floors below the NICU and when we have a code pink everybody does something! You check stairwells, block entrances, watch for suspicious people. SOMETHING! There was another code pink called yesterday and again, nobody even really notices/cares. SERIOUSLY? At least look towards the door, or acknowledge that it was paged. Otherwise I say, DON'T PAGE! Come on. they could have any number of possible background thingys. We have a lullaby that plays everytime a baby is born. That would be okay to ignore. Or page ramdon doctor names that nobody would recognize. Then it would still seem hospitally (yes, I'm making up words), and continue the flow of whatever else is going on, without irritating me.

Special Blogger Note- If you have not seen GH this week, the below information could be construed as a spoiler.

Speaking of irritating- okay, not really, it just seemed like it was time to change the subject, or at least take a left turn. I loved most of the show yesterday. I love "Scruffy Noah", mostly because I love "scruffy Rick". I thought his reaction to Matt was good. i loved the recognition on hisface when Anna said Matt's full name. I loved Matt's line "It's a little late to act like you care, Dad." That was swesome! Also, Noah's "You can be as angry as you want, but I'm still your father!" was great! I loved it and have been repeating it all week (I actually saw it in a preview earlier in the week) What the preview did not show was that Patrick was in the hallway and overheard. Didn't see that coming, but I should have. It was AWESOME. I'm really tired of the Noah/Patrick hating each other thing, and it was nice to see them get along for once. This is going to tear them apart. But hopefully by the time Alyssa Rose Scorpio Drake is born, they will get their crap together and be a family.

Blogger note- not digging Alyssa Rose. it's a fine name, but doesn't really go with either of their last names, so I hope that they change it.

And a final note: Lyric got the part that she wanted in the play. She was so worried about it, she almost made herself sick. But the cast list was posted today, and she let me know right away that she got it. Hopefully she will start to feel better now. (i'm still not convinced that she doesn't have what Jazz had on Wednesday, but we'll see)

Quick side-ish note: for those not working in a medical facility/hospital- Code Pink is a child abduction. At our hospital it would be paged "Code Pink 2" if it was a two year old. It's for any missing child in the hospital under the age of 18. It is really the one code where everybody scrambles. Code Red (fire) and Code Blue (medication emergency) get people moving, but nobody wants a baby/child to disappear on their watch.

The play that Lyric is in is called "Ramona Quimby" and it's based on the book(s). She is going to be Ramona's mom.

AWESOME photo...congrats to Lyric, I am loving GH (I had no idea about the hospital lingo, but now I do and hey, it's a soap...you should write ABC or call the comment line to set them right! LOL)

Have a great weekend!

P.S. You do know I speak Phantom, which always starts with PH, too, right? LOL

I work in a hospital too, so seeing that sort of stuff on the soaps bugs me as well. Our code for that is "CODE BABY" and any employee that's not with a patient scrambles for an exit door. I watch DAYS too, which has a lot of hospital time, and they drive me bonkers too with some of their errors. I gotta take a breath and remember that it's just a soap! LOL. I am loving the Rick time on GH this week. :)

Oops, one more thing I had to share...our hospital has an orthopedic surgeon named Jason Thompson, and every time he's paged I giggle to myself :).

Nice photo! I was there too. My first Rick Road trip with Aug!

Ok, for those of us who do not work in a hospital what is a code pink? Normally I notice little things like that, or things that are in a scene in one shot and gone in the next, but that one I have no clue!

Congrats to Lyric! Good for her.

What a great photo of the group!!

That was awesome of you to give those tickets to the other folks.

Oh My youngest daughters name is ALYSSA!! I hope they keep that!!!

I tried to get here STAT but I was unable to because of BLOGGER having a Code Purple (which is almost as bad as when they mix a Code Red WITH a Code Blue) ... today I am back and you are entered and I now I have to check on my kids. They are playing outside and I don't want a Code Adam or a Code Pink ...

Thank you for always coming back.